Over a hundred invited guests packed into the centre to be the first to receive a copy of the book, which has been written by the Walkley Historians and managed by inHeritage. The capacity audience comprised those who have been involved in the projects, whether as historians, oral history interviewees or providers of information.

The film premiere of Who’s Living in a Slum? watched by a full house.

Walkley Historians comprise nearly 30 members of the community who have come together to work on the project. For some, it is the first time they have written a historical book. The lavishly illustrated book is the first history of 20th century Walkley. 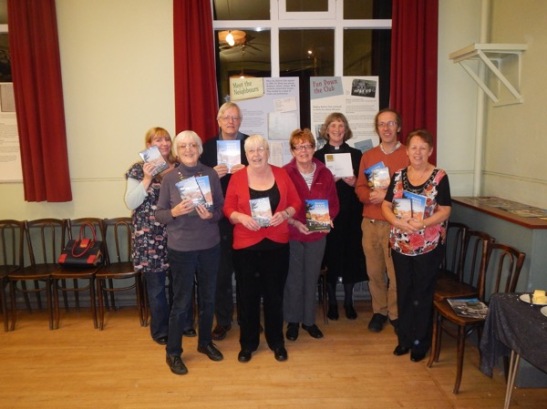 They also watched the world premiere of the documentary film ‘Who’s Living in a Slum?’ The film earned a round of applause during the end credits. It combines interviews, archive photos and oral history clips to tell the story of how Walkley was threatened with bulldozers during the 1960s and 1970s. The documentary covers life in Walkley, the slum landlords, what it was like to live through slum clearance, the Walkley Action Group campaign to halt demolition and life in Walkley today. The film was produced by inHeritage and Derbyshire filmmaker Gavin Repton.

Bill Bevan, project manager, said “Three years after we launched the project in Walkley Community Centre, over 100 people who took part in it returned to the same hall to celebrate their achievements. Walkley Ways, Walkley Wars has been recognized by the Association for Heritage Interpretation as a best example of community heritage. The book launch and film premiere demonstrated why.”

Copies of the book and DVD are available from Walkley Library, Beeches of Walkley and Gerry’s Bakery for a small donation to help fund reprints.

Notes to Editors
Heritage Lottery Fund – Thanks to National Lottery players, we invest money to help people across the UK explore, enjoy and protect the heritage they care about – from the archaeology under our feet to the historic parks and buildings we love, from precious memories and collections to rare wildlife. www.hlf.org.uk @heritagelottery@HLFYandH