Common Ground in Sacred Space reconfigured the interior of the Cathedral for more flexible uses by the community and commissioned new liturgical furniture from local makers. 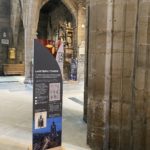 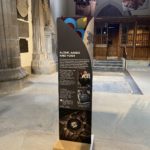 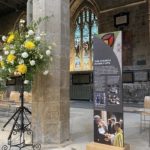 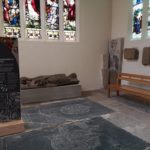 A series of interpretive panels about key locations, features, windows and sculptures.

A touchscreen database of biographies of people memorialised in the cathedral’s ledger stones.

Character-led audio scripts for a permanently installed sound and light presentation by the ledger stones.

We selected ‘characters’ to offer a good mix of women, men and children’s voices and variety of social status, heroes and villains, well-known and ordinary people, whose stories in some way illustrated aspects of Newcastle Cathedral’s and the city’s history.

We met with the project team virtually, received the interpretive planning documents, including a topic map, and received access to extensive volunteer-led research, which drew on online and printed archival and documentary sources. We developed the topic map into a storyboard, with a message hierarchy for each output. We also developed tone of voice for the three different types of outputs.

We scheduled text draft to write the panel texts, followed by the character scripts for the ledger stones and the touchscreen biographies. At each stage, the project team reviewed drafts, and we edited these to create the final texts. As we drafted the texts, we carried out further documentary, map and image research.